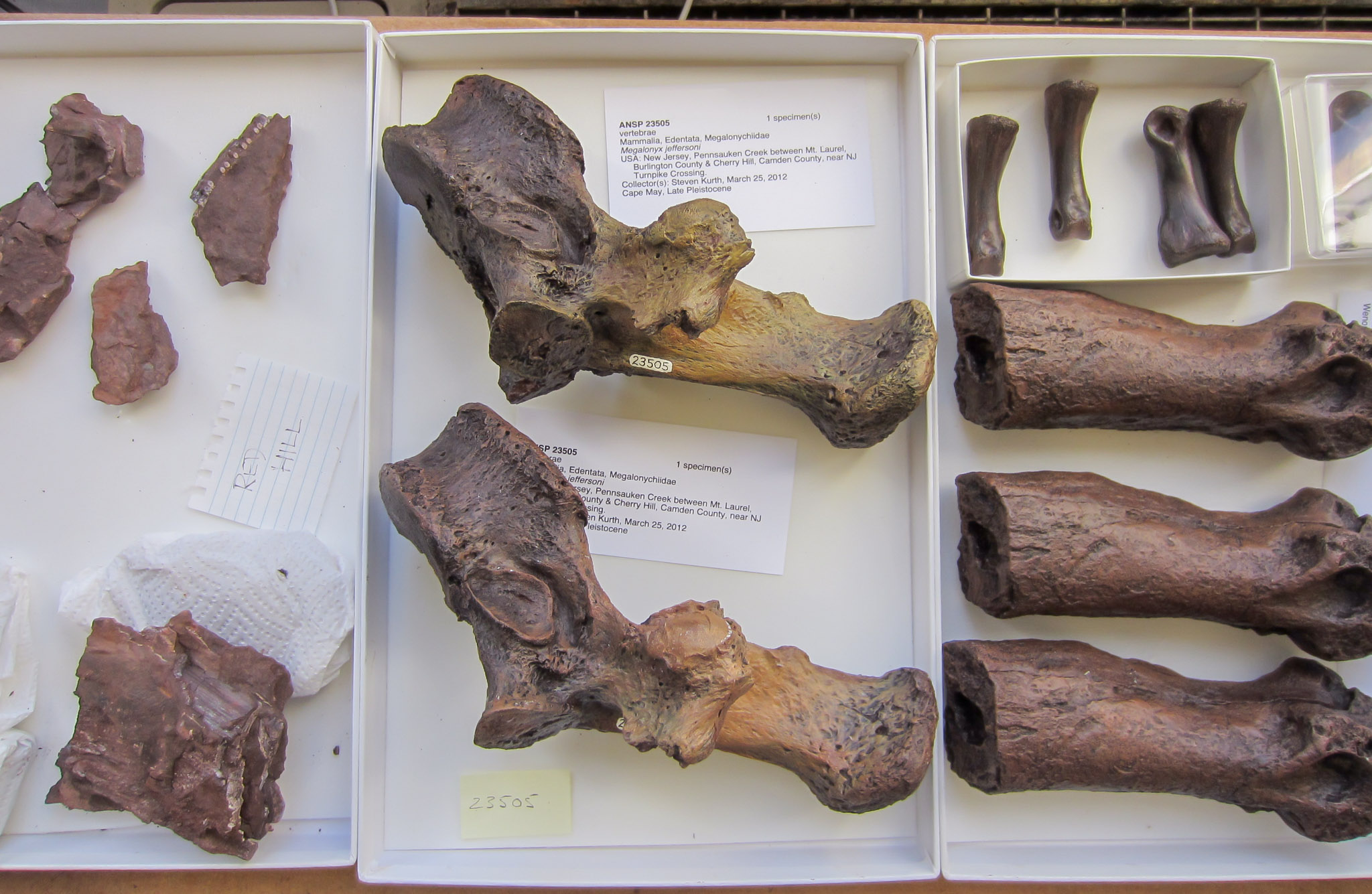 Ted Daeschler has this kind of job: when he’s explaining his work, he reaches for a vertebra from a giant ground sloth found in New Jersey.

Amiable and enthusiastic, Daeschler is the vice president for collections and associate curator of vertebrate biology at the Academy of Natural Sciences of Drexel University in Philadelphia. His office is littered with both fossils and reproductions of those fossils, the latter being the reason for my visit.

I’ve asked Daeschler to show me how the Academy’s fossil preparer, Frederick Mullison (out sick this day), makes castings of the millions-years-old findings. I’m curious because I’m looking for the answer to an intriguing and nuanced question: is there art involved in precisely replicating nature?

The space between the notes

Mullison, says Daeschler with deep admiration, “makes incredible casts.” Daeschler grabs the mold Mullison made of a fossil from a 365-million-year-old fish, explaining how the latex is painted on, the mold filled, and the resulting form carefully ground down (“It sounds like a dental office in here. It’s terrible, but I’m used to it”) and then painted.

“There is a big investment in making a cast, even a small one,” Daeschler says. “We are investing a significant piece of time in molding and casting and cleaning up the cast, painting it, and all the rest. There is also the original investment of fossil preparation — getting the fossil out of the rock and into a condition where it can be studied.”

Exact replicas of individual bones are important for scientific research, but there’s another category of fossil castings: the ones meant to wow the public, the complete animal skeletons posed in museum rooms such as the Dinosaur Hall at the Academy.

“If you are creating something for exhibition,” Daeschler continues, “then you absolutely are repairing pieces, you’re restoring things that might be crushed. So in that case I would say you are adding an artist’s creativity to it. That makes total sense to me. You don’t just pull something out the ground and cast it. There’s a lot that goes into it.”

The Academy is the perfect place to discuss what’s involved in the exhibition of prehistoric animals. A plant-eating duckbilled dinosaur called Hadrosaurus foulkii was discovered in 1858, and the Academy created a full cast of it and displayed it in 1868, making the institution the first place ever where the public could see a complete dinosaur.

Daeschler takes me to the Academy’s airy entrance foyer. Above us, with its head and long neck looming over the central ticket desk and its tail reaching to the stairway, hangs an early plesiosaur, a huge swimming reptile. Daeschler explains that in the 1980s, “A fossil preparer from the Smithsonian worked on this project and basically restored the bones of this big plesiosaur into a condition that could be mounted – so you could say, ‘Wow, cool, there’s a plesiosaur!’”

In other words, the point was to fashion something accurate and recognizable. “And that meant replacing parts that weren’t there or making parts based on other specimens, taking vertebrae that were crushed and putting them back into three dimensions,” Daeschler elaborates. Later, the Academy permitted a commercial paleontology company to mold the entire thing and sell casts of it, giving the Academy a royalty payment for each one sold.

Staring up at the Loch Ness Monster-ish skeleton, Daeschler notes, “We wouldn’t want someone to knock this off. We would probably have to sue them if they did.” 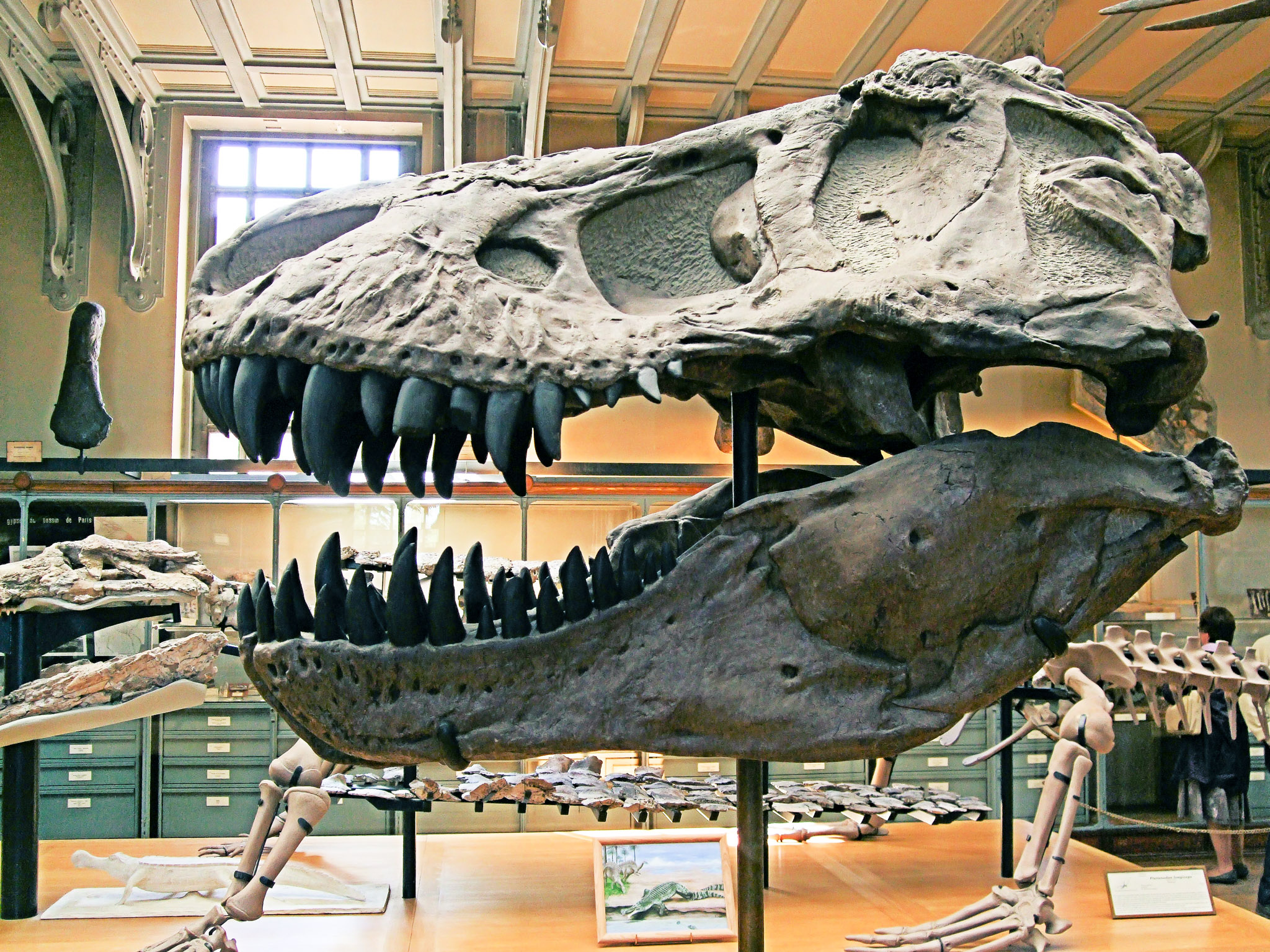 A Tyrannosaurus rex skull in the Gallery of Paleontology in Paris

Jurassic party of the first part

Filing a lawsuit over fossil castings is exactly what Black Hills Institute for Geological Research did. It’s a commercial paleontology company in South Dakota, controversial in academic paleontology circles. BHI is well known for having discovered and restored two of the most complete Tyrannosaurus rex skeletons ever found, nicknamed Stan and Sue, and for the allegations against its president, Peter Larson, who in the 1990s spent two years in prison for customs violations.

In 2010, BHI filed a $7.4 million copyright-infringement suit against a fossil research nonprofit in Montana, alleging they appropriated castings from BHI’s famous T. rex re-creations to assemble a complete specimen of their own. BHI loaned the castings to Fort Peck Paleontology simply to aid in identifying bones, but the suit alleged that Fort Peck pirated the castings by making exact copies. The amount of damages BHI sought is noteworthy, since it’s comparable to the almost $8.4 million the Field Museum of Natural History in Chicago paid for Sue at auction.

To qualify for copyright protection, the work must possess an element of artistic expression. “If you have some modicum of originality, you’re okay,” says BHI’s attorney for the suit, Luke Santangelo. He says the issues surrounding the copyrighting of fossil castings are “fun” to consider. The lawsuit was settled out of court, so no judgment was made about the artistry involved in replicating fossils.

Santangelo argues that the amount of imaginative re-creation that goes into making an exhibition-worthy skeleton merits copyright protection. “It’s got 65 million years of abuse,” he says of the state of the original fossil. “You don’t even know what it looked like. It comes out of the ground as this crushed mess.” The resulting skeleton is “a combination of some [elements] that occurred in nature and some that did not.” It’s in the “some that did not” where, Santangelo asserts, BHI’s artistry happens.

Fort Peck Paleontology would disagree, naturally. The organization’s attorney for the case, Antoinette Tease, points me to the briefs she filed at the time. “Knowledge of the detailed anatomy of the skeleton of T. rex has been in the public domain for a century,” notes one brief. It’s not like the stuff that’s not there needs to be imagined or creatively expressed.

In another brief for Fort Peck, Tease used BHI’s own language against them; an example would be the claim on its Web site that “Institute staff have successfully developed new methods and materials for molding fossil specimens and producing cast replicas that retain the look and feel of the original fossils.” Fort Peck pointed out that “BHI cannot now claim, contrary to its prior assertions, that dinosaur fossil casts are not really scientifically accurate because they are actually works of art.”

Fort Peck engaged Timothy Rowe, a professor of geology and the director of the Vertebrate Paleontology Laboratory at the University of Texas, Austin, as an expert advisor for the case, and when I get him on the phone, Rowe bemoans the legality of the commercial marketplace here in America and its demand for impressive-looking specimens. “That’s where the cosmetic stuff comes in,” Rowe says. “They restore bones to make them more complete to command a larger price.”

A long history of making specimens “more complete” to fetch big bucks on the marketplace precedes BHI and other fossil vendors. For example, a man named Albert Koch would have smiled at the lawsuit and the peddling of natural history. In 1845, this self-taught paleontologist who ran a museum of natural curiosities in St. Louis dug up the bones of a proto-whale in southwest Alabama. Actually, he collected bones from more than one of the mammals, but he assembled them into a single specimen, resulting in an animal of greatly exaggerated size.

Koch knew what he was doing: previously, for a mastodon skeleton at his museum, he increased its size by adding extra vertebrae and spacing them farther apart using blocks of wood. He called his 114-foot-long Alabama creation a “sea monster” and took it on the road.

In New York City the public loved it, but the scientific community scoffed at the fakery. So Koch headed to his home country of Germany. After Koch displayed his sea monster skeleton in several cities, King Friedrich Wilhelm IV of Prussia bought the thing, providing Koch a yearly pension for life.

“In the science of paleontology, people saw the carnival factor immediately,” Daeschler wryly comments when I bring up Koch’s antics.

Koch failed at gaining the approval of both the commercial marketplace and the scientific community, but BHI has made hay: its Web site includes a catalog where, for example, a casting of a Cretaceous-period predatory flightless marine bird known as a Hesperornis gracilis is listed for $4,000, and BHI’s most impressive work ends up in the world’s best natural history museums. But Rowe, the University of Texas professor, thinks it’s ridiculous to credit BHI with creative originality in its fossil recreations, and for him it turns on the definition of “art.”

“I think the word ‘art’ refers to art that people create as a commodity to sell or to please themselves,” Rowe says. “There’s an intrinsic commercial value to art and that’s in the intention, and Mother Nature has no such values. These [fossils] fall under the heading of natural resources that are there for the public trust.” People react passionately to prehistoric creatures, and beauty can be perceived in the craft of finding and assembling them. “There are a lot of the same emotions attached to these objects as to art: they’re rare, they’re precious, but in different ways.”

Rowe agrees that making a cast is a delicate operation: “It’s the sort of thing a surgeon would do, but I don’t think a surgeon could copyright the stitches in your surgery. We talk about surgeons as being artists — it’s a different meaning of the word ‘art.’”

While there was no ruling in BHI’s case against Fort Peck, the 9th Circuit Court of Appeals did rule in a case in 2003 involving extremely lifelike-looking glass jellyfish sculptures. The court noted that for copyright protection, “There must be something more than a ‘merely trivial’ variation, something recognizably the artist’s own.”

Back at the Academy of Natural Sciences, Daeschler holds up in one hand a caramel-hued toe bone about the size of a clothespin and, in his other hand, a casting Mullison made of it. “He really caught the color exactly, didn’t he?” Daeschler says to me. Then he puts them down carefully, mentioning he’s afraid he’ll mix them up.

Theresa Everline is a Philadelphia freelance writer interested in arts, culture, and urban affairs. A former editor-in-chief of Philadelphia City Paper, she has written for the New York Times, the Washington Post's travel section, Next City, Preservation Online, and SmartPlanet.com. Her essay about living in Cairo was selected as a "notable essay" for The Best American Travel Writing 2005.