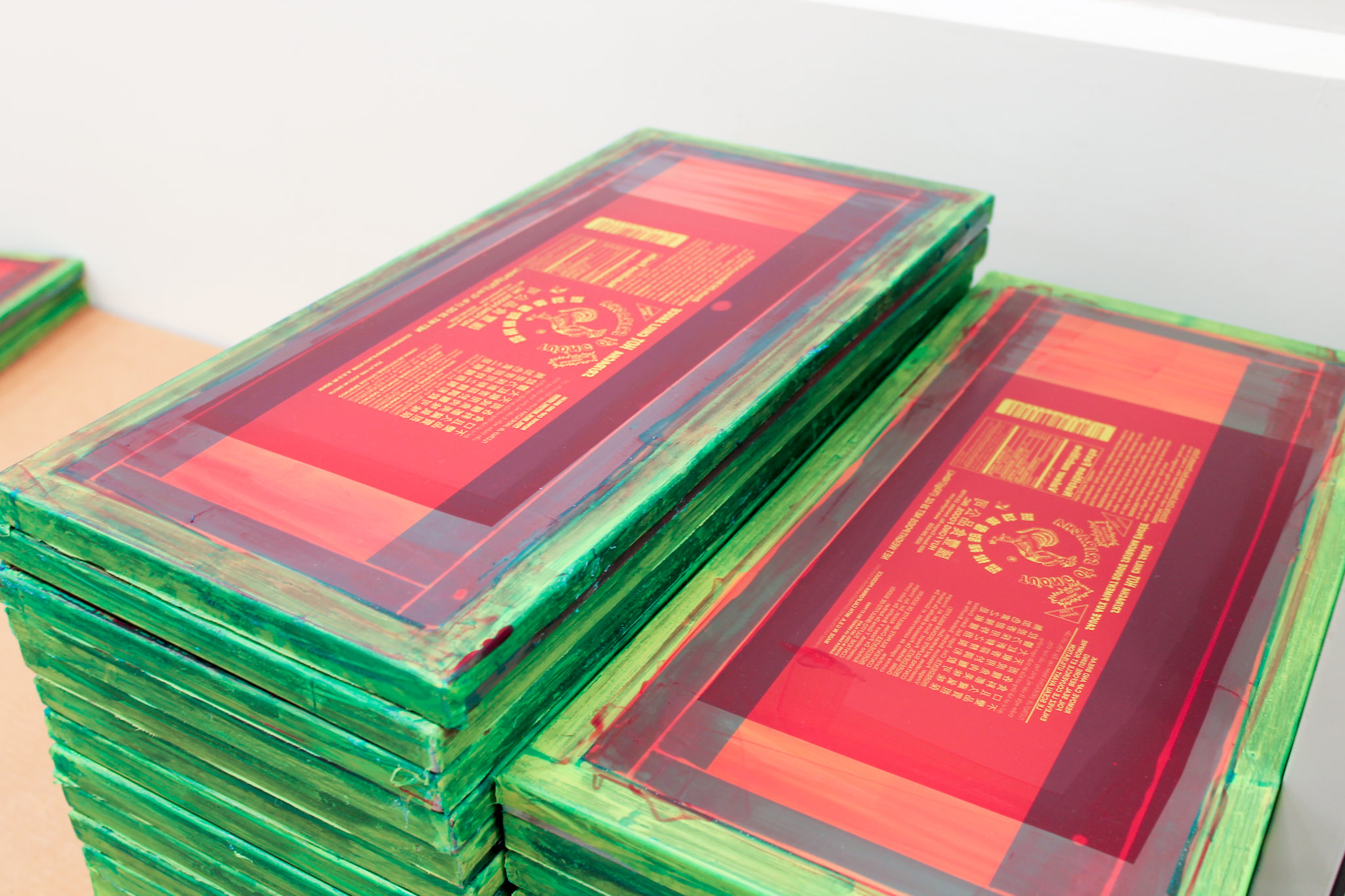 From late summer to late fall, thousands of tons of jalapeño chili peppers are ground up fresh at the Irwindale, California, factory of Huy Fong Foods, providing the spicy base of two types of chili paste and the popular chili sauce Sriracha, known by the rooster on its label. Huy Fong has been making Sriracha in Southern California since 1980, and in Irwindale since 2010. A heavily industrial suburb of Los Angeles, Irwindale is home to about 1,500 people, some living just blocks from the factory.

The grinding and the sheer quantity of chilies used to make Huy Fong’s products have resulted in what some Irwindale residents find to be an overly oppressive redolence in the air near the factory, enough to cause heavy breathing in asthmatics and bring tears to the eyes of children.

In 2012 the city began receiving complaints about the spice in the air. In October 2013, the city filed a lawsuit against the company, calling its scent a public nuisance and seeking a halt to its operations. A judge later declined to shut the factory down, but did require the company to make changes to reduce the smell. The city continued to pursue an official declaration of the factory as a nuisance, citing dozens of complaints. (Of the 61 complaints received by the city, 41 originated from just four households, including one occupied by the son of an Irwindale city council member.)

At a contentious meeting in April, the city council declared the factory’s smell a public nuisance. Finally, in May, with the help of the Business and Economic Development Office under Governor Jerry Brown, Tran and the city came to terms over the smell, and the city lifted its nuisance declaration.

To counter the negative press, this August Huy Fong Foods opened its doors to the public, offering tours of its 650,000-square-foot factory and the opportunity for people to get a personal sniff. Its first tours attracted thousands of people, creating what the Los Angeles Times called a “party-like atmosphere.”

I followed my nose and took the plunge to see if there was any sense to the complaints. 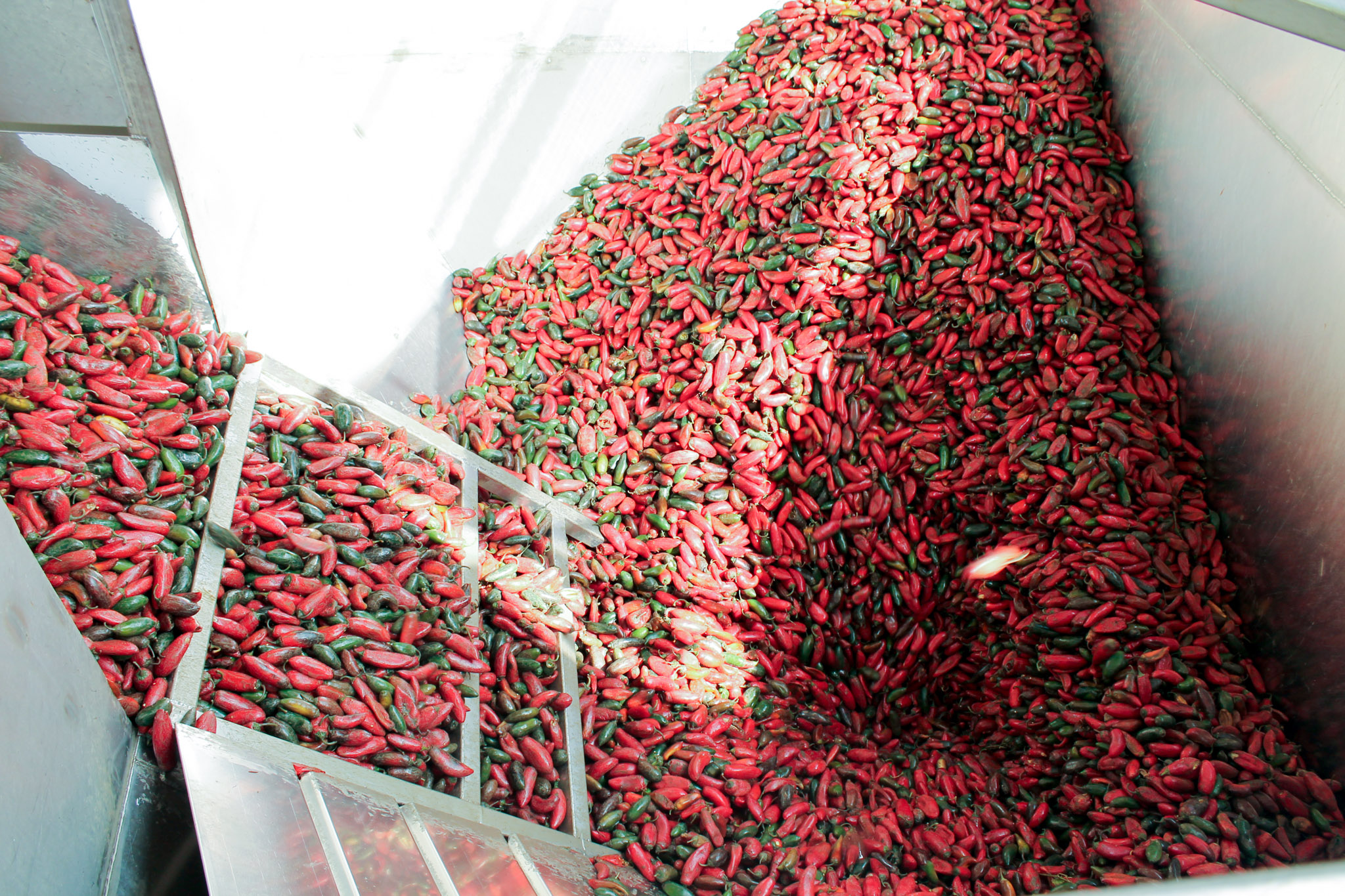 A few weeks ago, I buckled into the front seat of Hot 2, one of the 10-seat electric tour carts Huy Fong has acquired to accommodate the initial wave of interest in its tours. Available through the end of October, the Saturday tours are filling to capacity, even with slots for 2,100 people a day. I’m here for a private weekday tour of the factory as a journalist, and the morning atmosphere is muted.

My guide drives through the security gates and past the loading docks to the back side of the factory, where the first of about 40 trucks will line up today to offload twin trailers full of red and green jalapeños. Each truck hauls in about 22 tons of jalapeños – about a quarter million peppers – and as we approach, their scent is easily detectable though not overwhelming.

Workers hoist the trailers and dump their loads into hoppers, and conveyors pull the peppers inside the factory, where from a stainless steel gangway, I look out on a half acre of machinery that is grinding the jalapeños. This is the heart of the factory’s controversy, and metal ducts rise from the machines up through the ceiling 20 feet above. The company says that, amid the complaints and the lawsuit, it adjusted the filters between the factory and the open air, thereby reducing the spicy emissions.

Inside, the smell was noticeable but not particularly offensive or overpowering, though reports have cited some people on recent tours coughing and sneezing. If anything, the overpowering scent of the production area on my visit was garlic, a key ingredient in Sriracha and the chili garlic paste.

A worker cracks the lid off a blue plastic 55-gallon drum, revealing the bright red ground-chili base. Thousands of these drums, manufactured in-house, fill up a massive warehouse space, and nearly all of them will be filled during the roughly three-month chili harvest season. All year round, the blue drums are pulled from the warehouse and the chili base is pumped into a circuitous plumbing system, moving it into large mixers where product-specific ingredients are added, and then out into the nine-line bottling area.

I watch as a hulking machine takes small bulbs of clear plastic and blows them up into the familiar hot sauce squeeze bottles, screenprints them with the red rooster label information, and spits them out into a pile on a conveyor belt. Another machine picks them up and in a rapidly spinning carousel fills the clear plastic with sauce — capping, sealing, and pushing the complete Sriracha bottles down a single-file line to be boxed and shipped. This line, the fastest of the nine, can create, fill, and seal about 11,000 bottles of hot sauce an hour. 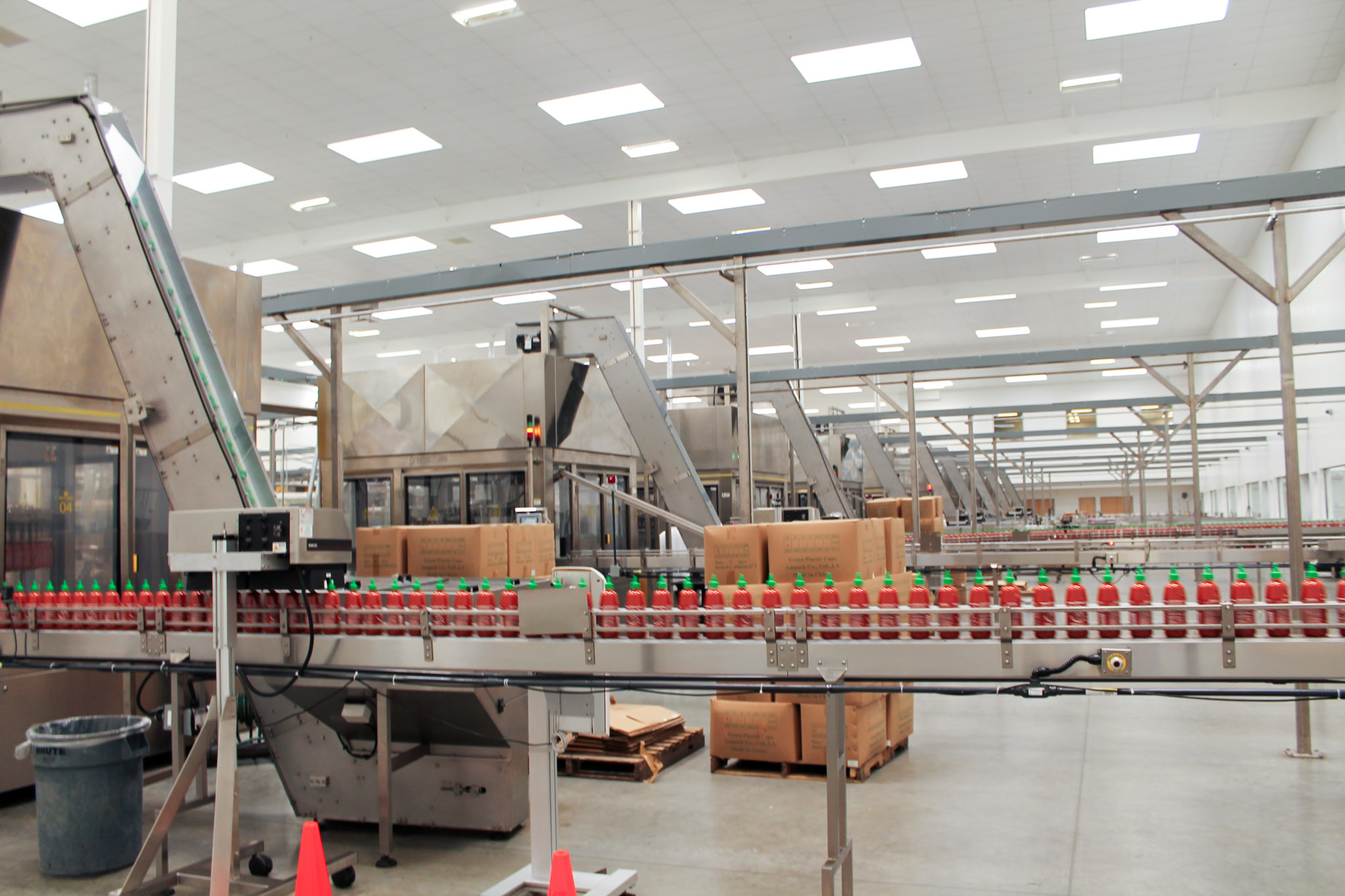 Variety is the spice of life

In a sparse but decorated room recently set aside for the crowds coming to see the factory, Huy Fong has created a small museum for itself, with framed newspaper articles, poster-size photos of astronauts using Sriracha on the International Space Station, and a creepy photo mashup in which the head of Huy Fong founder David Tran is half-superimposed over a portrait of Thomas Jefferson. Life-size cutouts of Tran are propped up for smiling photo opportunities with the once-secretive saucemaker.

When I meet him later in a conference room, Tran, who came to the United States as a refugee during the Vietnam War, is somewhat less smiley than his cardboard cutouts. He’s clearly upset by the complaints, the lawsuit, and the one-time declaration of his factory as a public nuisance. He says the city’s lawsuit hasn’t yet been closed, and he worries they could file it again at any time. He suspects that the issue may be political, or that it may be about getting more money for the city, or even that an unnamed competitor is trying to shut him down.

For Tran, the future of Huy Fong Foods is uncertain. But it’s jalapeño season, and the factory is humming with more than 170 workers, about twice the number of its off-season crew. The bottles of hot sauce are filling up by the thousands, as are slots for the factory’s Saturday tours.

What the city chooses to do is out of Tran’s hands. He’s adjusted his filtration system and he contends that there should be nothing for anyone to complain about now. But in the end, this is a factory, and there will undoubtedly be some negative externalities. “We use millions of pounds of chilies,” Tran says. “Of course there will be a smell.”

Photos by the author.

Nate Berg is a writer who covers cities, design, architecture and technology for a variety of publications. He is a former staff writer at The Atlantic Cities, and is based in Los Angeles.