San Francisco’s bohemians were always on the hunt for a place to live, get drunk, and hang with their friends. In 1995, it was the Mission. In 1900, they headed for a place that seems impossible today.

At the turn of the last century, city dwellers turned surplus horse and cable cars into an enclave of homes on the rolling dunes of the Outer Sunset. Residents embraced the famously foggy neighborhood for the same reason people move to a city’s edge today: cheap real estate.

Carville, also known as Carville-by-the-Sea and sometimes Cartown, was home to artists, families on a budget, and retired Civil War veteran Col. Charles E. Dailey, who sold donuts and coffee out of a car repurposed as a refreshment stand.

A 1904 New York Times article called Carville “the queerest-looking houses that civilized human beings ever occupied for Summer homes.” By 1900, more than 100 retired transit cars had been purchased and dropped off by the Pacific Ocean just south of Golden Gate Park. 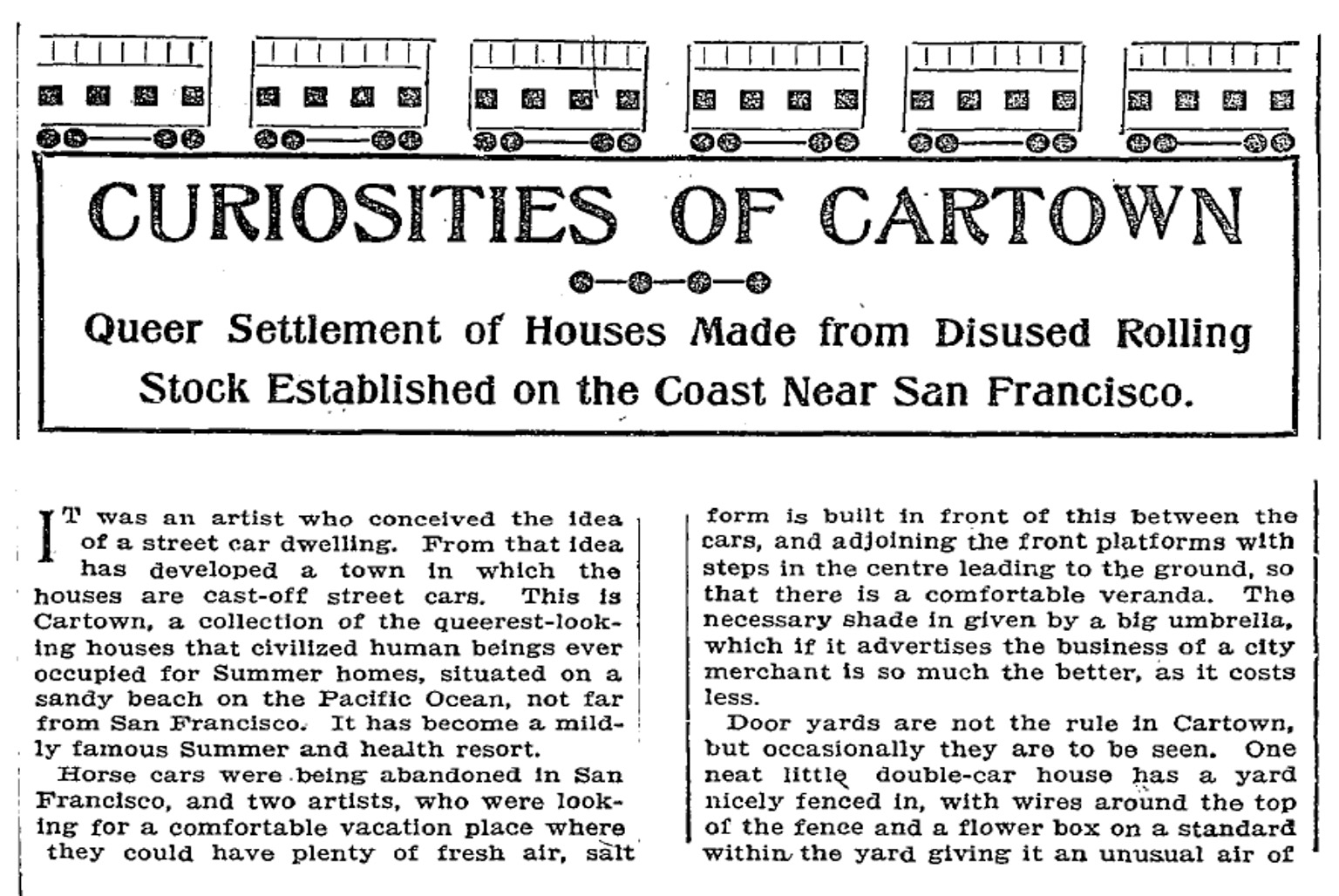 The disused transit stock wasn’t just turned into homes: owners created a shoemaker’s shop, a women’s bicycling clubhouse, a café, an Episcopal church, and a real-estate office with the abandoned cars, which sold for $20 with seats and $10 without. (By comparison, monthly rent for a Telegraph Hill studio might cost $8.)

Jack London, Maynard Dixon, and other artists who lived in San Francisco because of the cheap digs and the West’s freedom argued about art theory and nursed hangovers at the Carville outpost for the Fuzzy Bunch, a bohemian social club. Visiting musicians from New York’s Metropolitan Opera declared their San Francisco stop the best on their tour after spending a festive evening at La Bohème, Col. Dailey’s old refreshment stand, which was repurposed after his death as the Carville clubhouse for the city’s theatrical community.

Carville buildings started as simple layouts that spoke clearly to their origins, but residents started to dream big, opening the walls between side-by-side vehicles or stacking cars to create more spacious permanent residences before adding cozy touches like shingles and fenced-in yards.

After the 1906 earthquake, the pulse of San Francisco real estate quickened and soon even this district, renamed Oceanside, was prime territory. By 1908, 2,000 people lived in Carville. What happened next? Gentrification, of course.

Seeing the old streetcars as a blight on the increasingly middle-class area, the neighborhood improvement club advocated for their destruction, including ceremonially torching the clubhouse of the Falcons, San Francisco’s lady bicyclists, on Independence Day in 1913. By the 1920s, little remained of the streetcar community that had welcomed the city’s avant-garde, poor, and adventurous. The middle class came in — the “blight” had to go.

While it’s possible that several Carville remnants exist in the Outer Sunset, according to Woody LaBounty, who wrote the book on Carville, only one known structure exists. LaBounty’s photos of the interior of the Great Highway home show the skeleton of two side-by-side streetcars, including their original benches and lanterns.

When the Bay Area’s Muni or BART rail systems replace their stock in the coming years, it seems unlikely that the public will leap at the chance to renovate disused cars (and their bacteria-ridden seats) into homes, but if anyone did, the Outer Sunset won’t be the first place to look for wide-open spaces and discount real estate. In late 2013, the average price for a single-family home sold in the Carville area was $785,000.

Colleen Hubbard lives in England, where she writes fiction and nonfiction.